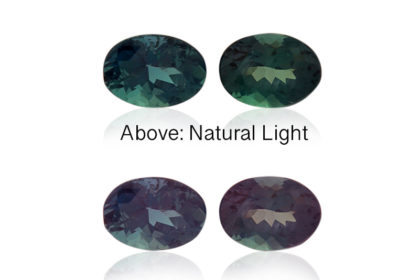 Alexandrite – June’s main birthstone and one of the most valuable gems found in nature.

It is often described by gem enthusiasts as ‘emerald by day and ruby by night’. The reason for this, is that finer quality gems display a dramatic and seemingly magical color change. This color change ranges from a bluish green in natural light to a reddish purple under incandescent light.

While Alexandrite is the worlds most famous color change gem. There are others that also can display their own color change phenomenon. These include;

Alexandrite is actually part of the Chrysoberyl family of gems.

It has an excellent durability, (8.5 on the Moh’s Hardness Scale), which makes it very suitable for every day wear in jewelry. Other members of the chrysoberyl family include cat’s eye and yellow chrysoberyl.

In addition to it’s color change properties, Alexandrite is also a strongly pleochroic gem, which means it can show different colors when viewed from different directions. Typically, there are three main colors; green, orange, and purple-red. However, the striking color change doesn’t arise from the gem’s pleochroism, but rather from the mineral’s unusual light-absorbing properties.

My First Introduction to Alexandrite

I was first introduced to Alexandrite, back in the mid-1980’s through my dad, who was also a gemstone supplier and enthusiast. His favorite place to go and hunt for gems was central Brazil. He would disappear for weeks at a time and then reappear with enticing bags of gorgeous gems such as, tourmalines, aquamarines and emeralds.

It was during one of his many travels, that Alexandrite was discovered in Minas Gerais, Brazil. The Brazilian material was gorgeous, larger in size and with in many cases displayed the most vivid color change. I remember gazing with awe at his amazing collection of Alexandrite, all of which were over 1ct in size and displayed a remarkable color change. This color change would range from a bluish green in natural light to a reddish purple under incandescent.

Previously, Alexandrite was most notably found in Russia, in the Ural Mountains, but that deposit had been long since, exhausted. This Russian Alexandrite was first discovered in 1830 and in fact the gem itself was named after the young Alexander II, heir apparent to the throne. It caught Russias attention partly because of its red and green colors that mirrored the national military colors.

Well, those days have long since passed and yet my love and fascination with Alexandrite remains. That means, we always seek to keep in stock a nice selection of Alexandrite and have been collecting them from a variety of today’s limited sources. Current locations include, Brazil, Sri Lanka, India and Madagascar.

Watch this brief video of some Alexandrites that I sourced from Sri Lanka and Madagascar. 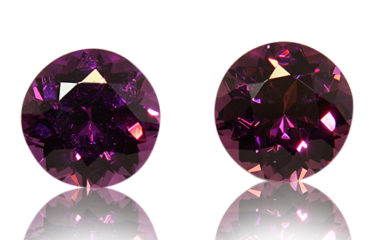 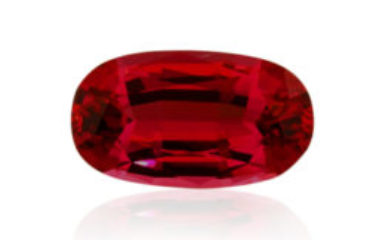 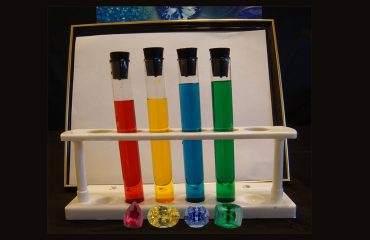