Emeralds are fascinating gemstones. They can display the most beautiful, most intense and most radiant green imaginable. In fact everyone understands the description ‘Emerald Green’, which is often used to describe something that is a beautiful and intense green. Unlike most gemstones, in an Emerald, inclusions are often tolerated. In top quality, fine Emeralds are even more valuable than Diamonds.

Emerald is actually a member of the Beryl family and shares the same chemical and crystal structure of Aquamarine and Morganite. It is relatively hard at 8 on the Mohs Hardness Scale, however it is somewhat brittle, meaning that it must be worn with care.

The name Emerald comes from the Greek ‘smaragdos’ via the Old French ‘esmeralde’, and really just means ‘green gemstone’. Innumerable fantastic stories have grown up around this magnificent gem. The Incas and Aztecs of South America, regarded the Emerald as a holy gemstone. However, probably the oldest known finds were once made near the Red Sea in Egypt. Having said that, these gemstone mines, already exploited by Egyptian pharaohs between 3000 and 1500 B.C. and later referred to as ‘Cleopatra’s Mines’, had already been exhausted by the time they were rediscovered in the early 19th century.

Written many centuries ago, the Vedas, the holy scriptures of the Indians, say of the precious green gems and their healing properties: ‘Emeralds promise good luck and ‘The Emerald enhances the well-being. So it was no wonder that the treasure chests of Indian maharajas and maharanis contained wonderful Emeralds. One of the world’s largest is the so-called ‘Mogul Emerald’. It dates from 1695, weighs 217.80 carats, and is some 10cm tall. One side of it is inscribed with prayer texts, and engraved on the other there are magnificent floral ornaments. This legendary Emerald was auctioned by Christie’s of London to an unidentified buyer for 2.2m US Dollars on September 28th 2001.

Emeralds have been held in high esteem since ancient times. For that reason, some of the most famous Emeralds are to be seen in museums and collections. The New York Museum of Natural History, for example, has an exhibit in which a cup made of pure emerald which belonged to the Emperor Jehangir. It is shown next to the ‘Patricia’, one of the largest Colombian Emerald crystals, which weighs 632 carats. The collection of the Bank of Bogota includes five valuable Emerald crystals with weights of between 220 and 1796 carats, and splendid Emeralds also form part of the Iranian National Treasury, adorning, for example, the diadem of the former Empress Farah.

The green of life and of love

The green of the Emerald is the color of life and of the springtime, which comes round again and again. But it has also, for centuries, been the color of beauty and of constant love. In ancient Rome, green was the color of Venus, the goddess of beauty and love. Today, this color still occupies a special position in many cultures and religions. Green, for example, is the holy color of Islam. Many of the states of the Arab League have green in their flags as a symbol of the unity of their faith. Yet this color has a high status in the Catholic Church too, where green is regarded as the most natural and the most elemental of the liturgical colors.

The magnificent green of the Emerald is a color which conveys harmony, love of Nature and elemental joie de vivre. The human eye can never see enough of this unique color. Pliny commented that green gladdened the eye without tiring it. Green is perceived as fresh and vivid, never as monotonous. And in view of the fact that this color always changes somewhat between the bright light of day and the artificial light of a lamp, emerald green retains its lively vigor in all its nuances.

Emerald is mined from a number of sources, however the most famous are from Colombia, Brazil, Afghanistan and Zambia.
Emerald is the Birthstone for May. 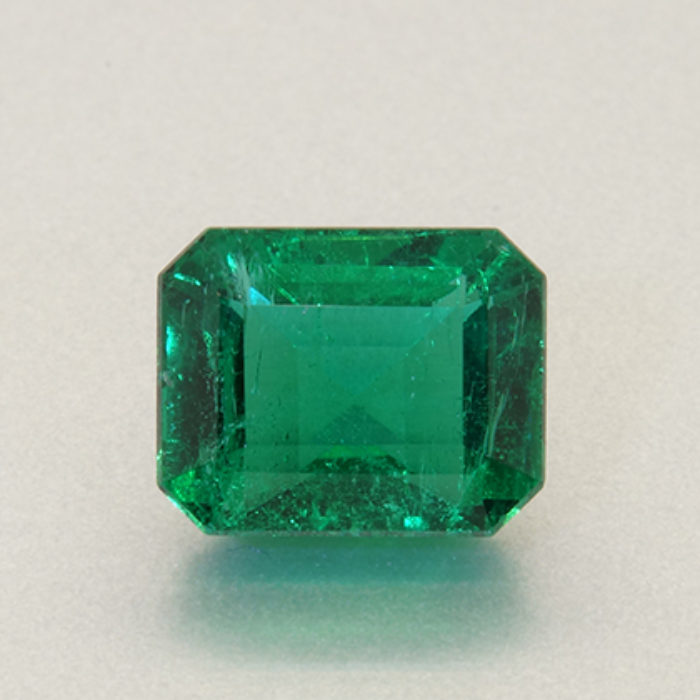