The next day yielded very little in gems, however I did go to a clinic for a malaria test. I was beginning to feel excessively fatigued. So while we waited for the results, we visited my friends new home construction site.

Security Is Key In Nigeria

It was quite impressive, he was building a fine cement structured main house with a guest house adjacent surrounded by a high security wall. On returning to the clinic the results that informed me that I had both malaria as well as typhoid.

Wow, a twofer! We immediately went to the pharmacy, where they loaded me up with two kinds of antibiotics. The malaria one was a three-day regimen, while the typhoid was a longer series of horse sized pills that, by their menacing appearance, seemed to be designed to kill everything including possibly their host. The next day we headed back to the capital, Abuja, in order to take a 45-minute flight down to Ibadan, a sprawling city in the south that lay right in the center of another famous gem mining area. It is in Ibadan that a number of gems including Tourmalines of all colors including Rubellites and Paraiba are found. It is also famous for Aquamarine, Morganite and many varieties of Quartz. Our plane was a small puddle jumping, propeller plane commonly used for short domestic flights. Unfortunately, our 45-minute flight turned into a 2-hour, teeth rattling, ordeal. The rainy season had just begun and the area was experiencing severe weather. We circled and circled the landing area, through turbulent skies, waiting for the thunderstorms to pass. Finally we landed in heavy rain, with the sky still black with thunder clouds. As the wheels skidded onto the tarmac, many passengers clapped for joy. On exiting the terminal, we were greeted warmly by our contacts, who drove us the 4-mile distance to our hotel. The drive took us about an hour, due to chaotic rush hour traffic that choked the roads and made progress seemingly impossible. We spent a restless night in a cheap hotel where everything seemed to be broken, as in no running water and only sporadic electricity. 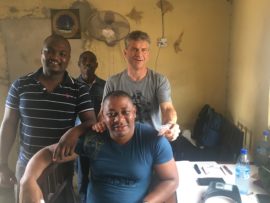 The next day proved to be the best buying day of the trip. We stationed ourselves in a friend’s office located right in the middle of a, very rough looking, residential area.  Apparently there is a lot of money changing hands there, but they sure don’t spend it on the neighborhood. Here I was able to buy some beautiful Aquamarine, Morganite and Tourmaline. After one more day that yielded very little in new material, we were ready to drive down to Lagos, Africa’s largest city, and fly back to Abuja. That simple 70-mile drive took us 5 hours. It was possibly the dustiest, slowest and most exhaust choked drive I can remember in many years. The roads were packed with vehicles of every kind including many trucks, carrying gasoline into the city from the oil rich south. The four lane road had been creatively expanded into 8 lanes as vehicles used the dirt shoulder as two extra lanes in each direction. Finally, we reached the airport, took the 45-minute flight back to the capital and from there, later on that evening, I safely flew on to France and after 25 hours of travel arrived home. (The End) 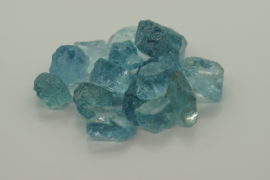 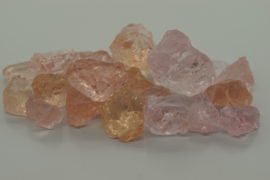 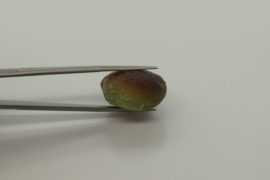